First, you must get up at 6:30and slice about ten apples for the homeschool group.     Make sure you save about half an apple from the kids lunch, then bring it home, let it age on the counter for about two hours, and then chop finely for the rice.     (or you could just chop an apple, skin on, but what fun is that??)

A variation on the Pioneer Woman's Pumpkin cake - more spices, added blackstrap molasses, doubled the recipe for two 13 x 9 (two potlucks same weekend), and adjusted to use one large can of pumpkin:


and in a small bowl mix:
1 cup plain kefir  (or milk with a bit of sour cream or plain yogurt equaling 1 cup)
4 eggs


Fold it all together the give up and get out your hand mixer until blended (this is cake!  not too much mixing!).

Divide batter between the two pans, bake for about 35 minutes.

(at the moment this is just notes for me ... I'll try to expand soon)

Per 1 lb box of risotto:

As we dive into a new school year, quick breakfasts are a big help for busy mornings.     I made a BIG batch and wrapped most individually for the freezer! 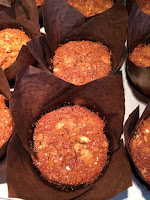 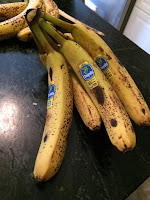 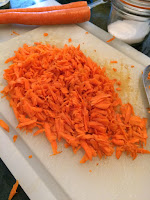 
* or buttermilk, or milk and a little sour cream or a mix of milk and plain yogurt or even just milk ... 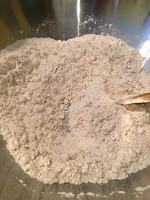 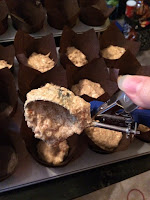 Then mix in flour and oats WITH A LIGHT HAND. Scoop into muffin papers - these are "medium" tulip papers, and my overflowing scoop was probably 3 oz.    Sprinkle with raw sugar if you can find yours ...

40 yummy muffins for my freezer and busy mornings! 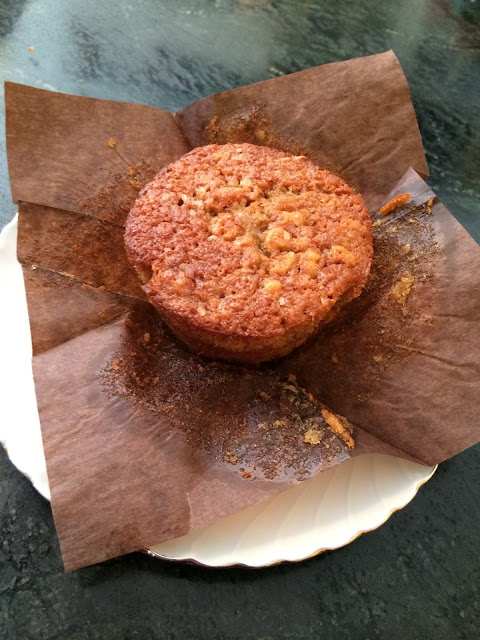 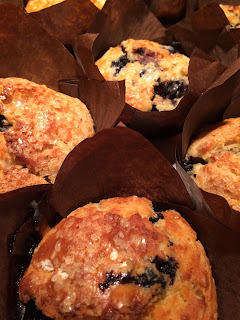 Life with three kids gets interesting.    Someone, probably someone with the same last name, left the freezer open a little bit ... enough that the ice bucket had chilled water and most of the food thawed.     Including a whole quart of New Jersey blueberries frozen for a winter pie.   I also had three ready-for-baking overripe bananas.  So I decided the only course of action (besides tossing thawed meat and cleaning the freezer) was to make muffins - a LOT of muffins: 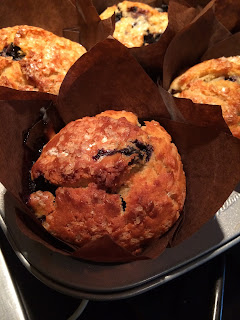 Melt (or better yet brown!) a two sticks of butter.    Stir in three mushed overripe bananas.  Cool a little bit then stir in 1 1/2 cups of milk and a cup of sour cream, then 5 eggs, 1 Tablespoon vanilla and if you have it on hand a dash of orange oil.     Then add one cup of brown sugar and one cup of white sugar.

In a separate bowl measure 7 cups of flour, 1 teaspoon salt and 3 Tablespoons of Baking powder (YES TABLESPOONS) and mix together

Stir liquids and dry ingredients together in whichever bowl is very large.


I was using these new muffin papers, which allow me to make taller muffins in standard muffin tins.   Scoop about 3oz of batter into each muffin paper.    Sprinkle each LIBERALLY with sparkling sugar or raw sugar for a bit of a crispy top.  This made 31 large muffins.   (Most of which I wrapped individually in foil once cool - and into the freezer they hopped!)

Bake at 425 for about ten minutes (so they rise and get a nice crispy crust), then lower temp to 350 until cooked through. 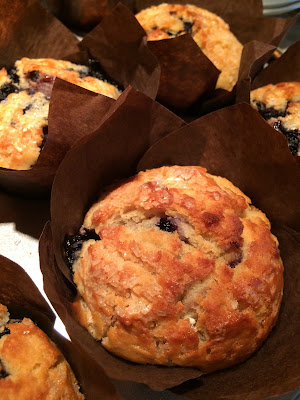 
A most excellent addition to a late Winter or Spring Brunch menu.    It's a lighter chicken salad - no mayo or dairy in the dressing - so pairs well with a buttery croissant.     Serve a scoop in the center of a strawberry and pecan salad or just with some saltines for a quick lunch.


1st:   roast two chickens  (or grab a rotisserie from Wegmans or Costco or your favorite place)


Pick the meat off the chicken.   (Save the skin and bone for stock if you'd like!)

Place whatever is left after the 11 month gets her fill while you're picking into your stand mixer:


whirl for 2-3 minutes until shredded.

With a spoon, mix in 1 pound of golden raisins.   Stir in dressing. 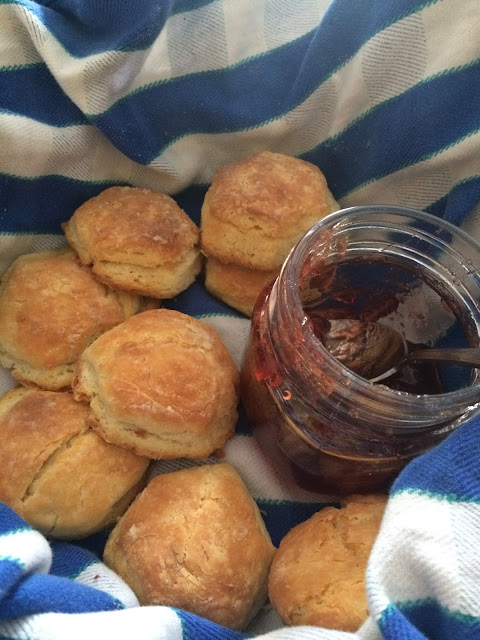 So Philadelphia, the home of my youth and my home again now, has a rich culinary heritage.       Pies and chicken and veggies from the Pennsylvania Dutch influence.    Breads and salamis and cheeses from the multiple European influences.   Soft Pretzels from German immigrants.   And of course spectacular pizza, pasta, hoagies and cheesteaks on every block, normally by 2nd or 3rd generation of family ownership with a Greek or Italian surname.    What you don't find too often here ... BISCUITS.    But I married a man of Southern heritage, South Carolina to be precise, and I decided 2017 would be the year of the biscuit.

1)  Self rising flour expires.    Of course in most cases if flour is in a Tupperware canister it doesn't really go BAD ... so I didn't worry about how old mine might be.   (only later I realized it was probably bought for my mother in law's visit when she made us her spectacular fried chicken ... before my first 1st grader WAS BORN).   But that's a lot of words to say that the self rising flour or baking powder should be younger than kindergarten eligible.

Attempt number 1 had pretty good flavor but didn't rise AT ALL.    Hockey puck, anyone??

2) When biscuit recipes say to "roll" the dough with a rolling pin they don't mean as thin as gingerbread dough.    And yes, it took me TWO pans baked before I realized WHY they weren't tall enough: I was rolling the dough WAY too thin.    My husband remembered the dough being TALLER than the biscuit cutter back when his mom made homemade biscuits ... AH HA!

So I still had half the dough and made it much much taller when I rolled it.   These ones were good!

4) a heavy duty lasagna/cheesesteak type spatula is PERFECT for cutting the cold butter: 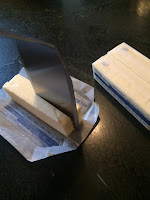 <<< slice longwise down the stick, rotate 90 degrees, and slice again 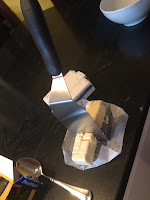 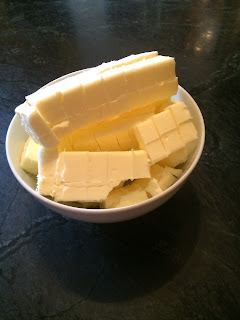 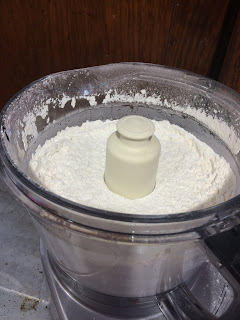 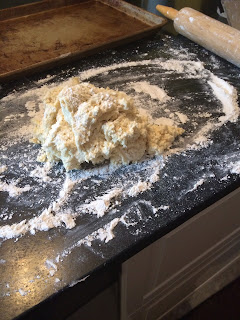 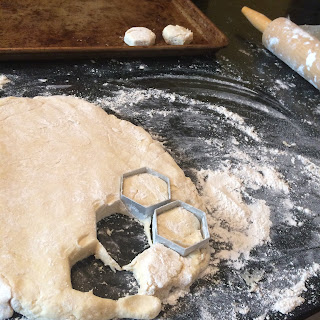 <<< see how the hexagon cutters leave no waste between biscuits? 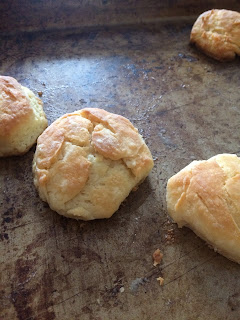 6) when in doubt, for any food picture, add a small jar with some jam ;)

into bowl of food processor:

Add:
4 sticks COLD (1 pound) butter, cut into small bits  (next time I do half lard)

Mix into flour/butter mixture, again a few quick pulses.      Let dough sit covered in a cool kitchen (my back section is in the 50s during winter) or in fridge for about 1/2 hour.    Set oven to 400 degrees.

Liberally sprinkle a clean dry counter (cool stone is great for this), then sprinkle top with flour and flour your hands and flour your rolling pin and flour the floor (ok, that part is optional, but I always do!).     Gently/quickly/barely roll out the dough - but this isn't cookies, so it should still be quite thick!     Use a straight sided drinking glass or biscuit cutter to cut biscuits, place them on pan an ungreased sheet pan.     Bake 12-14 minutes. 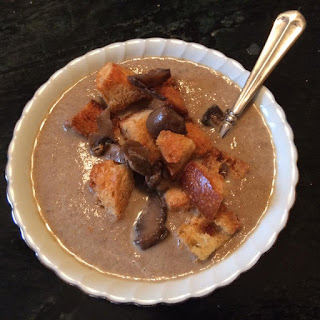 My husband asked recently about a mushroom soup, so when I was at the grocery store recently I picked up a big package each of sliced baby portabellas and sliced white button mushrooms.    This their story.

1st, starting yesterday, roast a chicken and make stock overnight from the bones.     WHAT?   You didn't want to roast a chicken just to make mushroom soup?   Ok.  In that case you'll need about 1.5 quarts of chicken or veggie broth.

Rinse the mushrooms well, while your soup pot or dutch oven heats with a turn of olive oil.     Add the mushrooms, cover and let them cook down.    Stir once in a while.

Meanwhile crush up a good handful of a more flavorful dried mushroom into some hot stock.   I had dried porcinis on hand, but there are lots of different ones available.

Once the mushrooms are cooked, pull out a cup or so into a bowl (for garnish) and in the pot with the remaining mushrooms add about 1 1/2 quarts of chicken broth, some dried onion (or sautee a chopped fresh one), some garlic powder, thyme, ground black pepper, nutmeg and about a cup of white wine.    A dash or two of Worcestershire sauce is good too.     Let it all simmer for 30-60 minutes.

Then use your immersion blender to puree well, taste to see if you need more salt, then add about a cup of half and half or cream.      (No immersion blender?   Food processor or blender will also work, but be careful with hot soup and it takes up more room in the dishwasher)

Serve  garnished with croutons and the reserved mushrooms. 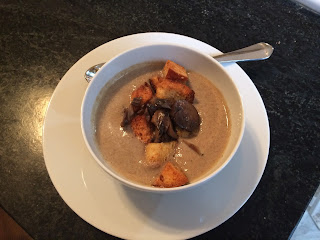